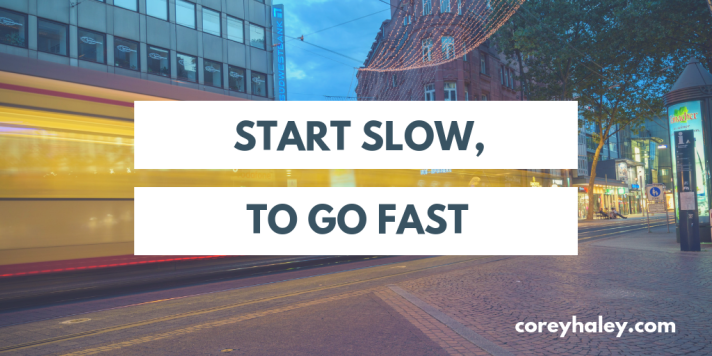 It took our school over a year to implement Learning Sprints. Yes, over a year.

We decided to follow the advice of others and start slow, to go fast.

I think we have all experienced an idea that was implemented too fast. The learning is rushed. It usually does not work for the site as there are specific aspects that have not been taken into account. Also, it feels imposed, as opposed to something that came from the people who will do the work. We have all seen these plans try, and fail.

We decided to start Learning Sprints slowly by exploring the process before even speaking to staff. This was in the form of a 4 day Learning Sprints session. The ideas were understood and we started to think about what it might look like in our building.

Next, we recruited a small group of teachers to experiment with putting in place this structure at our school. We tried out the plans and the tools. We made mistakes. Here is the thing, these mistakes were not fatal because we were only working with a small group who were comfortable with not getting it right the first time. This experimentation lasted for almost 5 months.

Next, we expanded our a few more people who were interested in the Learning Sprints process because they had heard about it from some of the teachers who were talking about it in the staff room. These new people were able to add more refinements to our process and have more insight into how it would work best for us.

We slowly expanded for the entire year, 10 months of school. It was not until 12 months after starting with a small group that we expanded to the entire school staff.

How did it go? Think about it… Half the staff were already engaged in the process. The process had already been tailored to fit our school, staff and community. People were invested in the process and had experienced success.

It was the easiest implementation I have ever had.

There is still work to do. We are working to embed this as part of what we do. We are also continuing to adapt and improve. But it has been an overall success.

I think it it because we started slow, to go fast.

View all posts by Corey Haley

This site uses Akismet to reduce spam. Learn how your comment data is processed.